What is pansexuality, and how is it different from Bisexuality 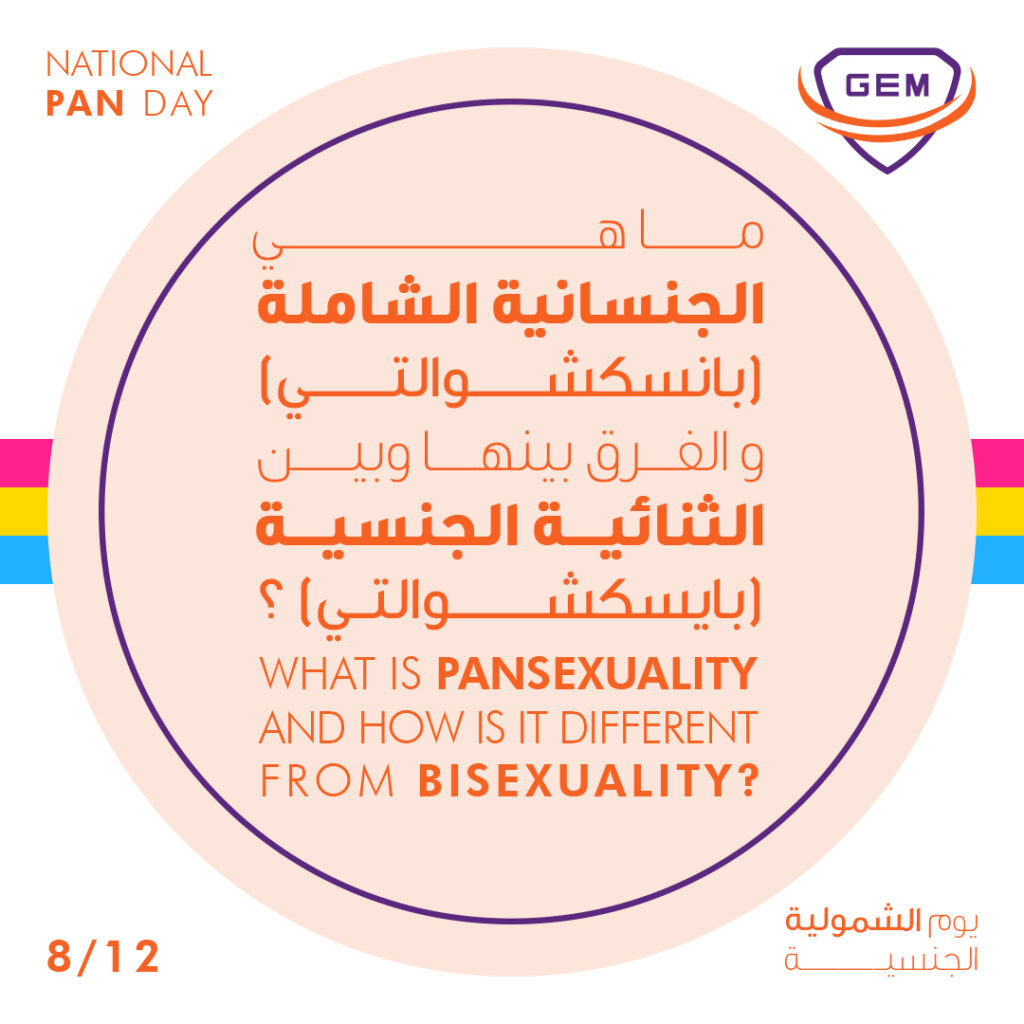 By the beginning of the twentieth century, knowledge about human nature has developed far beyond human imagination, especially if we compare the knowledge level we have nowadays to how it was in previous centuries. On one hand, it adopted many simple pre-judgments due to lack of knowledge, and the religious ideological thoughts’ dominance and control over the intellectual production, on the other hand.

The scientific research on sexual orientation and gender identity, in particular, led to a knowledge revolution that is as socially worthy as the industrial revolution. Although these concepts are still taboo in some cultures, and they are still questioned or concerned by many people, there is a fact that it can’t and shouldn’t be denied; there is a percentage of people which is not little; who are distinguished by their sexual orientation and gender identity among those so-called “majority or traditional”, who have a heterosexual orientation.

Over the past few decades, new terms related to sexuality and its topics such as sexual orientation or gender identity have been listed in dictionaries and began to be dealt with or interacted with in our daily lives. Since knowledge is the nature and the forefront of wisdom, it may be better to try to know and understand some subjects, rather than ignoring or fighting it, intentionally or unintentionally.

When it comes to sexual orientation, to a varying degree, most people became able to distinguish between heterosexuality, homosexuality, and bisexuality. These are not all sexual orientations. There are others that may be less common and may cause some rejection and problems, such as the concept of pansexuality, for example, although it has been known since the beginning of the twentieth century, but it was rarely used and was not disclosed aloud.

The term pansexuality, which I define as overall sexuality, is composed of two parts: The prefix “pan” is translated in Greek as “all”, while “sexual” in English and “sexu” in Latin refers to “sex”. It is a fairly new term, and has been widely popularized in the 21st century, thanks to celebrities in the performing arts, although the idea has been known before and some manifestations of it can be recognized in the writings of Sigmund Freud.

The term pansexuality became famous thanks to the actress and singer Miley Cyrus, who identified herself in one of her interviews as pansexual. She mentioned that she can’t define herself as a girl or a boy and that she doesn’t want to be identified as a person of a certain gender, gender identity, or sexual orientation, because she is unable to define it herself. There are other world-famous celebrities who are sexually inclusive such as: actress Kristen Jaymes Stewart, singer Sia, Lady Gaga, and others, including Madonna.

Why is it applicable to adults only?

This sexual orientation is only applicable to adults because it includes in its aspects the fact that it relates to sexual desire and the ability to establish a relationship with another person regardless of their biological or cultural sex. For people of this orientation, there are no definite boundaries when it comes to feeling sexual desire and sexual attraction towards another person whether it’s sexual, psychological or biological gender female or male. What matters to them is that it’s only a human. Also, these people identified with this sexual orientation are not interested in fulfilling the exaggerated sexual desire with the partner,  as much as they are interested in establishing a relationship with the other person in focusing on the personality, characteristics, emotions, and so on. Pansexuals refer to themselves as blind to the sex/gender and sexual orientation of their partner, which means that this is not required and doesn’t play a role in their romantic or sexual interests.

Of course, this orientation should not be confused with bisexuality. The percentage of people with this orientation is estimated from 1 to 1.5% among the adults in the world, which is of course a large percentage considering the world population, which recently reached 8 billion, of whom at least a third are adults.

Although the concept of (Pansex) should not be confused with Bisexual (Bisex), the differences between them are not significant. Pansexuals, as mentioned earlier, can have feelings for anyone regardless of their sexual identity, their biological sex, who they feel when they identify themselves sexually, their sexual preferences, and so on. Therefore, for them, what is important is only the personal and physical features that interest them and arouse the feelings to establish a relationship with the partner that goes beyond sexual relationships. On the contrary, bisexual people have a sexual, emotional, psychological and intellectual drive towards people of the same sex or of the different sex of the male segment and females primarily; meaning that they seldom cross the boundaries of biological sex. It should be noted that bisexuality does not necessarily mean that females and males are attracted in this way in a ratio of 50/50. Some bisexuals may be attracted to males more than women or vice versa, and this does not make them, of course, non-bisexual.

Unfortunately, all people with non-stereotypical sexual orientations usually face stigma, which is fueled by the cultural and religious heritage that extends its authority over the individual’s sexual life and monitors it, in addition to that, we find some people believe; that everyone who is not stereotypical lives a decadent and abnormal sexual life without emotions, relationships or mature partnership. As a result of that and other misconceptions, pansexuals suffer from higher rates of violence, social exclusion, abuse, and cynicism even among homosexuals or bisexuals. This being said, it can lead to feelings of low self-esteem, alienation, rejection, and despair, which cause psychological disorders such as depression that may lead to committing suicide.

Currently, many simplified tests can be found on the Internet designed to help discover ourselves and our sexual orientation, but unfortunately, most of them are not reliable resources and often cause many personal and social problems. In case we have doubts about our sexual orientations, the interaction with such tests is not harmful, but we have to know that they are not diagnostic and may be inaccurate at best because it is not always easy and simple to understand feelings or emotions. Better than fitting ourselves into a cultural stereotypical box، consult the psycho sexologist not only to help to identify sexual orientation and gender identity but also to help accept oneself and try to adapt positively to it.

Finally, we have to remind you that there is no “right” or “wrong” way to be emotionally and sexually attracted to someone, and it’s also important to remember that all other sexual affiliations and orientations can be considered equal as long as they are based on mutual consent and do not cause harm to oneself or the partner.

By: Dr. Bassam Aouil, who is a Psychologist and sexologist. Dr.Aouil is an academic professor at the University of Poland