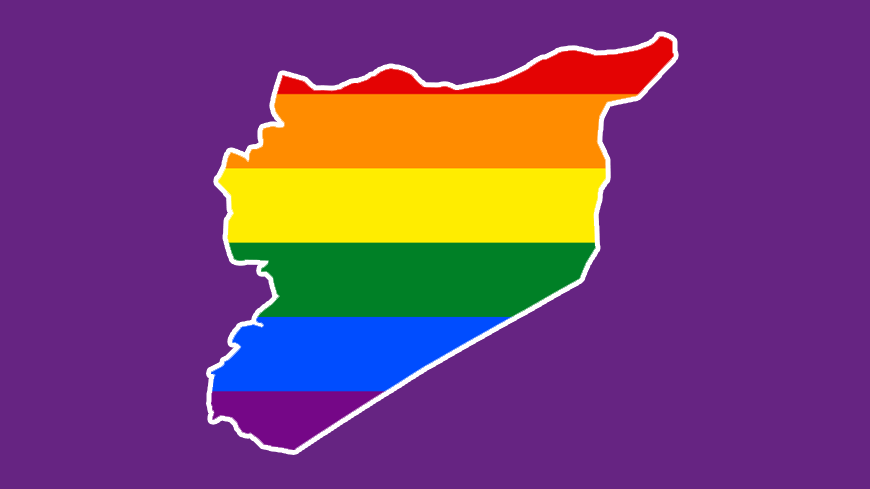 Syrian LGBT activists are carrying out various campaigns to demand their rights and stop the violations against them.

Homophobia remains prevalent in the Middle East and North Africa regions. Most countries in these regions do not recognize the rights of the LGBT community, and homosexual acts are criminalized. LGBT people in Syria, in particular, face daily discrimination and violations amid policies and legal provisions that incite hatred and violence against anyone who is different and not meeting the prevailing social standards and expectations. Article 520 of the Syrian Penal Code criminalizes homosexuality and is used to sanction LGBT people with a prison term of up to three years.

In this context, Hazem (a pseudonym), a gay man who was displaced from Rif Dimashq to northwest Syria, told Al-Monitor, “Someone ratted me out to Hayat Tahrir al-Sham (HTS), and I was arrested and faced the most severe forms of torture and humiliation for eight months. When I was released by a general amnesty, I moved to areas under the control of the [opposition-affiliated] Syrian National Army for fear of being arrested again.”

He added, “But because of my sexual orientation and society’s intolerance toward me, I am still unable to get a job. I find myself compelled to live in complete secrecy for fear of facing any physical or psychological harm.”

Majd (a pseudonym) is also a gay man from Aleppo who resides in the Turkish city of Gaziantep. He told Al-Monitor, “I moved to Turkey more than six years ago because I was persecuted in Syria where I was unable to reveal my sexual identity.”

“But the situation here [in Gaziantep] is not much better. I lost my job in a humanitarian organization in 2018 after they found out that I am gay, and I am still unable to find a new job for the same reason. Recently, I tried to apply for asylum in a European country, but to no avail,” he said.

“My fear and sense of rejection by others never end. They climaxed when Turkey withdrew from the Istanbul Convention [on combating violence against women, under the pretext of encouraging homosexuality] last year. It is when I have to visit a government office that I get scared the most. Although homosexuality is not prohibited in Turkey, that does not mean that it is not shunned by society. The homicide rate against LGBT people in Turkey is very high, and the government has banned all LGBT-related events. I hope to leave this country and live a normal and safe life before it is too late,” Majd added.

Meanwhile, Syrian LGBT activists are organizing campaigns in an attempt to change stereotypes in society and demand rights. In most cases, these initiatives end up fading amid lack of organization to ensure their continuity and achieve the desired results.

On March 24, Syrian activists and part of the LGBT community formed a Syrian organization, the Guardians of Equality Movement (GEM), concerned with defending the rights of LGBT people. This organization was the first step toward protecting and preventing the recurrence of violations against members of Syria’s LGBT community.

GEM’s chairman of the board, who preferred to remain anonymous, told Al-Monitor, “I was previously arrested and violated for being a homosexual, amid the absence of any organization defending the rights of the LGBT community in Syria. This pushed me, along with a number of activists, to establish GEM. We reach out to our target audience through [traditional] media, social media and partner organizations, or through our own members.”

He explained, “We deal with caution and care with the beneficiaries of our services and abide by numerous data protection and privacy policies, to ensure the security and safety of the beneficiaries. After confirming and documenting the violation that the victims were exposed to, we offer them a financial grant to help them improve their situation and move to a safe area.”

One of the recipients of a financial grant by GEM told Al-Monitor on condition of anonymity, “Last year, I was arbitrarily arrested by HTS. I was prevented from contacting my family, and I was not allowed to hire a lawyer. When my mental and health condition severely deteriorated because of the beating I was facing, I was transferred to a hospital on the fourth day of my arrest, after which I was released. However, HTS security members kept raiding my house almost daily for a month. When I obtained the $7,000 financial grant from GEM, I was able to move to the countryside of northern Aleppo, and I am now trying to enter Turkey in order to reach Europe.”

Syria has been stricken by a bloody conflict for more than 10 years, during which cases of violations against members of the LGBT community increased, including forced disappearances, arrests and sexual assaults in various Syrian regions. International organizations are unable to find any solutions to help individuals at risk in light of the international media silence about the continuous violations that LGBT people are subjected to in Syria. There are no accurate or approximate statistics on the number of Syrian LGBT people, as many of them are reluctant to disclose their orientation.

Fadel Abdul Ghany, director of the Syrian Network for Human Rights, argued that the LGBT community in Syria is unable to obtain its rights given the strong rejection of all religions and the societal culture against this community. “This is why no entity is able to defend them,” he told Al-Monitor.

“Add to this the large number of violations in Syria against LGBT people, such as killings, torture, arrests and forced displacement. This happens while human rights organizations are refraining from shedding light on these violations that are violations of personal freedoms,” Abdul Ghany said.